COSMOS recently funded improving the versatility and the strong-motion format outputs of the Converter that was originally developed at UC Santa Barbara in 2006. The current version of the Java-based application (Beta mode) can input strong-motion records in the formats of four major strong motion networks and COSMOS, split the record into single-channels if necessary, and then generate output files converted to a user-selected format. A description of the tool and the requirements for its use are provided here. The Converter is available for download at the link below:

Warning: The Converter is in beta mode and some limited testing has been done, but COSMOS makes no claims for the accuracy of the files at this time. Please check exported files for accuracy, and please let us know at cesmd@strongmotioncenter.org if you have any problems, have found any errors, or would like to suggest any improvements.

Description of the Converter

The Converter is a Java-based graphical user interface (GUI) designed to visualize and convert strong-motion data from the following formats:

The input format is specified by the user (i.e., no auto-detection). The output format options are:

The improved COSMOS Converter has an integrated splitter to open CGS and New Zealand data files that contain one or more channels and split them into individual files. The output is one file per channel per physical parameter (acceleration, velocity or displacement) and type of spectra (Sa, Sv, Sd, and PSA or PSV) as well as corresponding plot files.

The COSMOS converter is a Java program which can be launched by either double clicking on the file icon or by issuing “Java -jar COSMOS_Converter.jar” in a command line.

This GUI is easy to use: a user simply navigates to a folder on a locally-mounted drive containing the input data files, specifies the output directory, and then clicks the export button to generate the outputs. 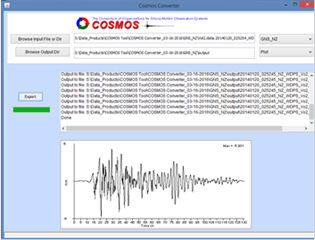 Examples of the COSMOS Converter outputs:

One spreadsheet per channel of data per physical parameter.  Each spreadsheet contains the information about the record, the time series in a single column, and a plot of the time history. 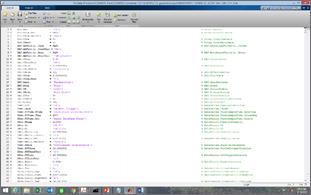 One M file per channel per physical parameter. Record metadata are included, as well as time series in a single column. The MATLAB file also contains a script for generating a plot of the time series. 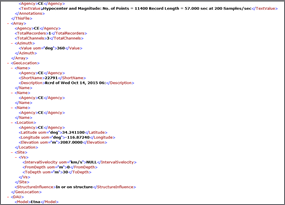 One file per channel of data in XML format according to the Virtual Data Center Tagged format. 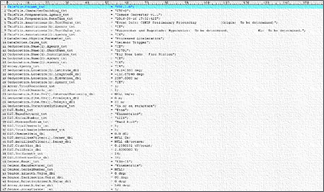 One file per channel of data in the Virtual Data Center Tagged format.

Java 1.8 or later is required.

For questions and comments regarding the Beta version of the COSMOS Converter, please email us at: